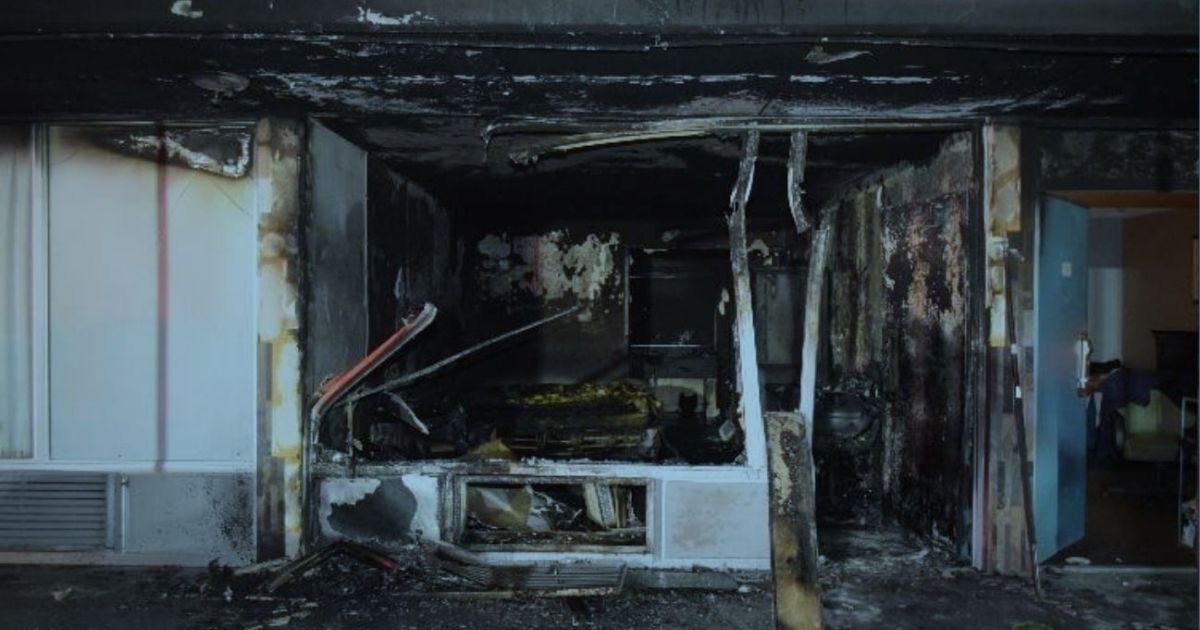 Around 5:30 p.m. on Jan. 7, Officers Ben Frazer and Steve Gibson of the Richmond Police Department in Virginia spotted some smoke coming up from a nearby motel and headed over.

“At first, like I said, it — it didn’t look terrible, it was, you know, it almost looked like a trash can fire, kinda, at first,” Frazer told WWBT-TV in Richmond.

“Gibson had actually called me on the radio and said, ‘Frazer it’s the — the whole room’s going up.’ And about that time, I was right above the room, and that’s when it came over top of the second-floor railing.”

Using the guardrail to lead him through the thick smoke, Frazer alerted residents on the second floor to the danger brewing.

On the first floor, Gibson used a fire extinguisher to battle the blaze and a ram to open locked doors to make sure everyone got out.

Firefighters arrived a short time later and were able to put out the blaze in less than 20 minutes. Ten residents had already exited the building, thanks to the two officers.

“At approximately 5:33 p.m., crews responded to the Richmond Inn and Suites at 6346 Midlothian Turnpike for the report of a building fire,” the Richmond Fire Department shared on Jan. 7. “Once on scene, they found heavy smoke coming from the structure.

“Crews helped to safely evacuate occupants from their rooms and worked quickly to put out heavy fire found in a room on the first floor. All exposure rooms were checked and no damage was found, so adjacent occupants were allowed to stay in their rooms. The incident was marked under control at 5:51 p.m. The Richmond Fire Investigations Unit is working to determine the cause and origin of the fire.”

The investigation later revealed that a resident had left clothes draped over a heater, causing the fire.

Richmond Police Capt. Faith Flippo applauded her officers for their bravery and announced that she’d nominated them for a lifesaving award.

“They went above and beyond,” Flippo said. “That’s, you know, that’s, that wasn’t what, you know, we get called to do a lot of the times. They put themselves in danger to save others.”

“Recognizing just two of our Richmond Police Department Heroes who bravely put their lives on the line to save everyone else involved in a life threatening situation!” the Richmond United for Law Enforcement Facebook page shared on Thursday.

“An Extra Special Thank You for a job well done goes out to two Richmond Police Officers identified as Officer Ben Frazer and Officer Steve Gibson who are responsible for saving numerous lives when they unexpectedly found a fire at a Richmond motel.

“These RPD Officers evacuated guests who were in their rooms and unaware of the fire that had reportedly broken out in another part of the building!”

The officers were just happy that no one was hurt and don’t consider themselves heroes.

“In a situation like that, I don’t think it matters if you are a police officer, a firefighter or whatever,” Frazer said. “The average human being would have done the same thing we did — I mean, you know, there’s a lot of good people in this world and you just got to do the right thing.”

“Just makes us happy that no one was hurt,” Gibson said. “We were able to do our job, help people, and nobody got hurt. And that’s the biggest thing for us.”

Amanda holds an MA in Rhetoric and TESOL from Cal Poly Pomona. After teaching composition and logic for several years, she's strayed into writing full-time and especially enjoys animal-related topics.

As of January 2019, Amanda has written over 1,000 stories for The Western Journal but doesn't really know how. Graduating from California State Polytechnic University with a MA in Rhetoric/Composition and TESOL, she wrote her thesis about metacognitive development and the skill transfer between reading and writing in freshman students.
She has a slew of interests that keep her busy, including trying out new recipes, enjoying nature, discussing ridiculous topics, reading, drawing, people watching, developing curriculum, and writing bios. Sometimes she has red hair, sometimes she has brown hair, sometimes she's had teal hair.
With a book on productive communication strategies in the works, Amanda is also writing and illustrating some children's books with her husband, Edward.